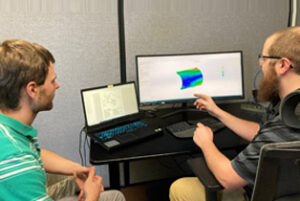 Hiniker Company, Inc. was founded in 1970 by Ken Hiniker. Ken designed and manufactured products for the agriculture industry that included sturdy cultivators, efficient shredders, and niche equipment such as the cover crop seeder. The Hiniker brand became known for tough, productive, reliable equipment.

In 1983 Hiniker was purchased by an investment group in Chicago. Later that year they merged their Coster Engineering business with Hiniker and created the Coster branded line of Water Purification products. Our Coster products are the number one source for water vending machines and are used throughout the world.

In 1995, Hiniker branched into designing and manufacturing snow removal equipment which developed into a line of snowplows, skid steer plows, and spreaders. Hiniker snow and ice equipment is built to enable the operator to work as efficiently as possible. We do this with innovative and purpose-built designs like the Hiniker C-Plow and the Hiniker Scoop Plow.

Hiniker is always looking for strong and motivated dealers. If you have the facility, the finances, the right location, and can provide outstanding customer service, we would love to hear from you. If you think you have what it takes to be a Hiniker snow or agriculture equipment dealer, please apply to become a dealer below:

Hiniker is always looking for fast pace, high performing employees to add to our team. Click below to review available positions.